Arsenal and Newcastle will battle Chelsea in their pursuit of Sergej Milinkovic-Savic, according to reports in Italy.

The Serbia midfielder has regularly been linked with a move away from the Biancocelesti following his outstanding performances since joining from Genk in 2015. 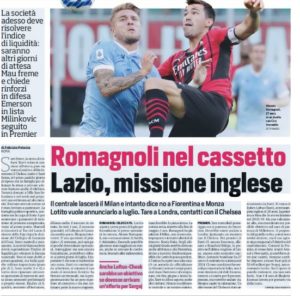 Il Corriere dello Sport report agent Mateja Kezman is actively seeking a new club for his client and that, as well as interest from Chelsea, Newcastle and Arsenal are also monitoring the situation.

Lazio director Igli Tare was at Rome’s Fiumicino airport on Wednesday and may well have been on his way to London for talks.

While Chelsea are reportedly interested in Milinkovic-Savic, Lazio would also be keen on Blues duo Emerson Palmieri and Ruben Loftus-Cheek, the report adds.

Lazio boss Maurizio Sarri still hopes to keep the 27-year-old in the Italian capital and, while Il Corriere dello Sport suggests the trio of Premier League clubs are interested, none have so far been willing to meet the €60 million asking price.