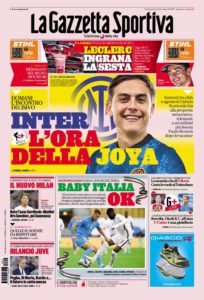 Summit between the club and Dybala’s agent

Expected to say yes to Nerazzurri proposal: three-year contract at €6m plus bonuses

Pessina the best, Gatti what a debut

Mancini: ‘Well done, but we need to score goals’

Pogba, Di Maria, Kostic and… the future in seven moves

Key men to get the market going

Eriksen’s second shot at life, Conte wants him at Tottenham

A year on from the dramatic scenes

Rovella, Okoli and Co up for auction

The Under-21 squad is a collection of gems

Clubs lining up for Nicolato’s boys 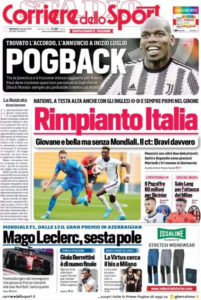 Young and impressive, but without a World Cup

Nations League, heads held high against England too (0-0) and still top of the group

Mancini with another two debutants: Gatti and Esposito shine

On Tuesday there’s the test in Germany

Agreement reached, announcement at the start of July

Deal between Juventus and the Frenchman for a four-year contract

Paul has to resolve some personal matters in England first

Lang forward for the Milan attack

He plays for Brugge 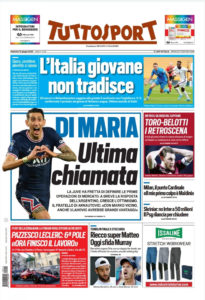 Juve in a rush to define the first transfer moves

Soon the Argentine will give his response, optimism is growing

Arnautovic’s brother: ‘With Marko by his side, Vlahovic would benefit too’

The young Italy does not betray us

Juric mediates and there are three offers