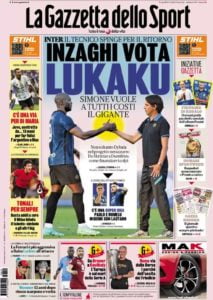 Simone wants the giant at all costs

Not just Dybala in the Nerazzurri project

From Skriniar to Dumfries: how to finance the buys

There’s a super idea, Paulo and Romelu together with Lautaro

Dream of the atomic attack

There’s a way for Di Maria

Juve, a contract that runs 13 months to make the Argentine and Max happy

No more losing players for free

Milan lock down their symbolic talent and other big stars

From Bremer to Koulibaly, Europe wants the Serie A walls

Roma out of the stock exchange, why the Friedkins walked away 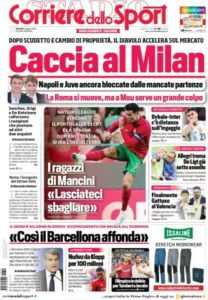 After Scudetto and change of ownership, the Diavolo steps up the transfer campaign

Napoli and Juve still blocked by lack of sales

Sanches, Origi and De Ketelaere strengthen the champions who are looking for another two signings

Dybala-Inter, there’s distance on the salary

Marotta has to raise the offer to get his yes

Joya has no real alternatives

Chelsea, Liverpool and Man United proposals for the Dutchman

‘I want to bring an attractive and aggressive style of football’

‘Barcelona will go under this way’

Alarm bells rung by Romeu, vice-president with focus on economy

Decisive board meeting on June 16

There’s no financial crisis for Liverpool and the Reds, who still challenge Guardiola with the Benfica striker 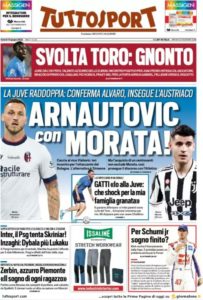 Juve double up: Confirmation for Alvaro, chasing the Austrian

Hunt for Vlahovic back-up: yesterday meeting for the Bologna striker

But the arrival of a centre-forward doesn’t rule out Morata, as talks continue with Atletico

Gatti: ‘Me going to Juve: what a shock for my Granata family’

Young defender admits: ‘My folks all support Toro. Emotional moment for me, it’s disappointing I won’t work with Chiellini’

Juric gives the OK for the Azzurri talent from FC Zurich

Positive meeting for Joao Pedro, agreement with the player, but struggle with Cagliari

Praet repeat is getting closer

Gabriel in goal, Pellegri to be bought out

Super offer from Paris for the Slovakian: €6m per season

The Parisians insist for the centre-back, Marotta prepares push for Viola Milenkovic

Strengths and weaknesses of the Joya’s Inter

Zerbin, Piedmont Azzurro: ‘The dream of every young lad’

Back at Napoli after Frosinone loan, the pride of the Nazionale